HOW TO PROTECT EDUCATION FROM ATTACK IN THE UKRAINIAN CONTEXT?

Since the beginning of the conflict in 2014, over 740 schools have been damaged in Ukraine with 648,000 students and teachers being affected by the conflict. Boys, girls, teachers, and educational staff in Donetsk and Luhansk oblasts are directly suffering from the consequences of the armed conflict, which include significant protection and psychosocial risks and needs, and a disrupted learning process. Their chances to live a normal life and develop to their full potential get bleaker with every new attack on their education.

Without access to quality learning, children are not only being deprived of education today; they are also being robbed of future opportunities. This affects all of us. Attacks on education are therefore not only a humanitarian and development issue. They are also social, political, and moral issues, to which we are obliged to respond. Military use of schools leads to students being excluded and dropping out from schools and universities, lower levels of new enrollments into schools, poorer rates of attendance in schools, and lower levels of transition from one level of schooling to the next. The education of girls seems to be particularly negatively affected by the practice of military use of schools.

On 12th of July 2018, the Ministry of Education and Science, together with Save the Children, UNICEF, and the Education Cluster, hosted in Kyiv a round table discussion on “The Safe Schools Declaration: how to protect education from attack in the Ukrainian context?”. This was attended by the Minister of Education and Science, representatives of the Ministries of Justice, Defense, and Foreign Affairs, Interior,  Oblast administrations, representatives of the Ombudsman, the Government of Norway, , and a number of other international and local NGOs and UN agencies working in the area of protection and education.

The Safe Schools Declaration and the Guidelines for Protecting Schools and Universities from Military Use during Armed Conflict which were discussed during the round table are the only international documents dedicated exclusively to the safety of schools, children and teachers in the context of an armed conflict.

“I would like to thank you, our partners Save the Children and Education Cluster, for collecting data on attacks and military use of schools. I also very grateful to UNICEF for developing and promoting "conflict sensitive" approaches to education through online courses for children and teachers. Over the past years, the Ministry committed the Declaration by means of: continuous work of practical psychologists and other pedagogical workers who have undergone special training to provide psychological assistance to the participants of educational process; more than 30 schools went on distance education and a number of legal acts have been developed and approved to ensure the implementation of the constitutional right for education in the temporarily occupied territory of Ukraine, territories on the line of separation and internally displaced children. The Ministry created conditions for children to continue studying at the place of new residence or temporary stay. We simplified the procedure for enrollment in educational institutions, as well as assured opportunities for teaching online, individually, as well as on an external basis. To wrap up, I want to emphasize that Ukraine consistently working in terms of providing educational opportunities on the line of delimitation and will join the Safe School Declaration as soon as possible”, mentioned Liliya Hrynevych, Minister of Education and Science.

Countries that join the Safe Schools Declaration make a political commitment to better protect students, teachers, schools, and universities during armed conflict. The Declaration was drafted through a consultative process led by Norway and Argentina and was opened for state endorsement at an international conference held in Oslo, Norway in May 2015. So far the Safe Schools Declaration has been endorsed by 79 countries worldwide. 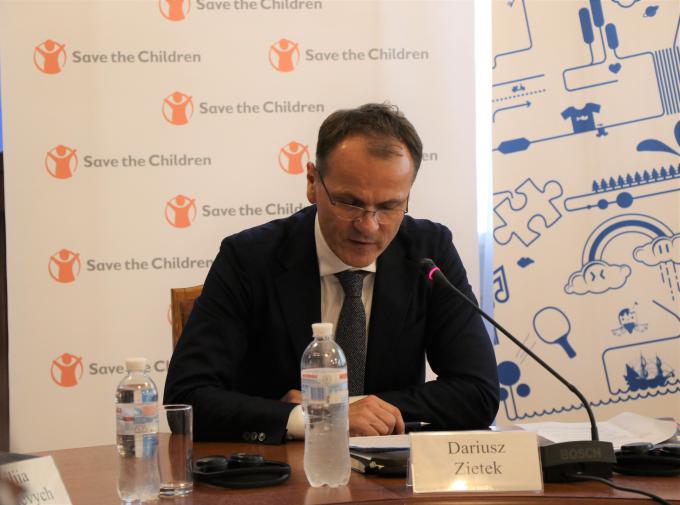 "Save the Children is the largest global independent organization for children. We want a world in which all children survive, learn and are protected. The goals we have set ourselves are not easy. But by building strong partnerships with communities, governments, businesses and the international community, we have the courage to say that it is possible. In Ukraine since 2014 Save the Children has reached over 400,000 people of which 250,000 children, implementing activities in child protection, education, health and child poverty. We do not want children in Ukraine to feel as “forgotten children” as they are not. Save the Children and partners will continue to be operational in the country until 2021 and beyond, and will continue to support reforms and development processes. I hope that we will find a way to jointly consider the state of Ukraine today and find solutions to help children in this country. We look forward to your support and working with you towards endorsing the SSD and protecting the rights of all children in Ukraine”, emphasized Dariusz Zietek, Save the Children in Ukraine Country Director.

The Safe Schools Declaration is a collective political effort to reduce the impact of conflict on education. The Guidelines provide practical guidance for armed forces – to help them reduce their impact on schools and universities, on the education of individuals and on the wider society. The Declaration provides a political framework – to support the guidelines, but also to form the basis for practical action. The Declaration and Guidelines are not legal instruments; they are voluntary political documents – that express our commitment to safe schools for all. Governments that endorse the Declaration pledge to take concrete steps to ensure that education can continue even in times of conflict, including by committing to exercise restraint with respect to the use of schools and universities for military purposes, thus helping to better safeguard the civilian character of such facilities.

“More than four years of conflict in eastern Ukraine have taken a devastating toll on the education system, forcing 200,000 girls and boys to learn in hostile environments amid volatile fighting and the ongoing threats posed by exposure to weapons of war. Children are learning in schools with bullet holes and sandbags in classroom windows, bomb shelters in the basements, shrapnel or unexploded ordinance found in school yards. Across eastern Ukraine, UNICEF helps provide psychosocial support and mine risk education to hundreds of thousands of children, youth and caregivers. We also support repairs to damaged schools and kindergartens and distribute vital education supplies such as educational kits, furniture sets and sport equipment. UNICEF appeals to endorsement of the Safe School Declaration and ensure that safe learning environment is available to every child», highlights Giovanna Barberis, UNICEF Representative in Ukraine”, highlighted Giovanna Barberis, UNICEF Representative in Ukraine.

During the round table, participants discussed the Safe Schools Declaration and the Guidelines of the newly released materials of the Global Coalition to Protect Education from Attack, which are seen as crucial international instruments to protect children’s right to receive education in safe schools during times of armed conflict. Education practitioners  from 2 oblasts – Luhansk and Donetsk and representative of the Education Cluster  shared their stories from the field. 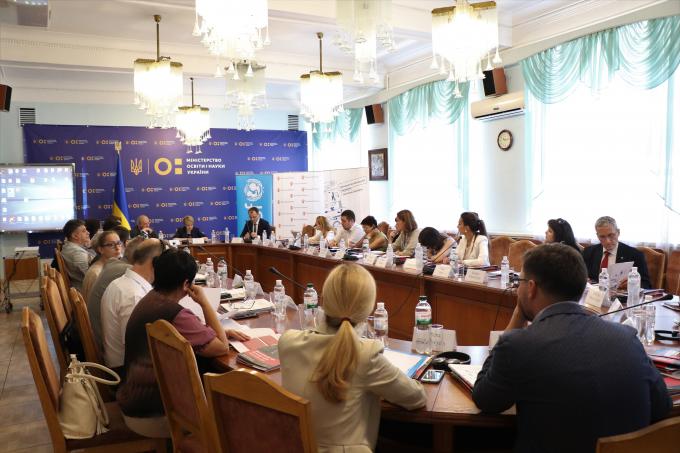 TheSafe Schools Declaration was presented in 2015 at the First International Safe Schools Conference in Norway. The Declaration provides countries the opportunity to express political support for the protection of students, teachers, and schools during times of armed conflict; the importance of the continuation of education during armed conflict; and the implementation of the Guidelines for Protecting Schools and Universities from Military Use during Armed Conflict. So far 79 countries have endorsed the Declaration.

The Declaration contains a number of commitmentsaimed at strengthening the prevention of, and response to, attacks on education during armed conflict. These include: improving reporting of attacks on schools; collecting reliable data on attacks and military use of schools and universities; providing assistance to victims of attacks; investigating allegations of violations of national and international law and prosecuting perpetrators where appropriate; developing and promoting “conflict-sensitive” approaches to education; seeking to continue education during armed conflict; and supporting the work of the United Nations on the children and armed conflict agenda.

The Education Cluster is an open formal forum for coordination and collaboration on education in humanitarian crises. The Education Cluster brings together NGOs, UN agencies, academics, and other partners under the shared goal of ensuring predictable, well-coordinated and equitable provision of education for populations affected by humanitarian crises.

The Global Coalition to Protect Education from Attack (GCPEA) was established in 2010 by organizations working in the fields of education in emergencies and conflict-affected contexts, higher education, protection, international human rights and humanitarian law who were concerned about ongoing attacks on educational institutions, their students and staff in countries affected by conflict and insecurity. GCPEA is an international coalition of organizations that includes: CARA (Council for At-Risk Academics), Human Rights Watch, Institute of International Education/IIE Scholar Rescue Fund, Protect Education in Insecurity and Conflict, Save the Children, Scholars at Risk Network, UNICEF, UNESCO, and UNHCR.

Ukraine is among 37 countries where a systematic pattern of attacks on students, teachers, schools, and universities occurred from 2015-2019