MICRO-GRANTS THAT MAKE A MACRO DIFFERENCE: SAVE THE CHILDREN SUPPORTS SMALL BUSINESSES IN EASTERN UKRAINE

When the conflict erupted in eastern Ukraine in 2014, thousands of people not only had to flee their homes, they also left behind their jobs and businesses. Being internally displaced and living in the conflict zone means a constant struggle to survive. In addition to shelling and unexploded ordinances which pose an everyday threat, there is the challenge of being accepted by a new community which often does not have the resources to support displaced families. As a result, many displaced people cannot meet their basic needs for food, medicine and clothing, and lack access to a source of income to earn money for their survival.

Save the Children’s Micro-grants programme, funded by the Ministry of Foreign Affairs of Netherlands was established to provide families with desperately much needed support (money or in-kind items) so that they could rebuild their businesses or start new ones. Supporting small local businesses benefits not only families in need, but creates a ‘ripple effect’ that impacts the  entire community, strengthening the local economy and increasing access to goods and services that have become scarce due to the ongoing hostilities.

Below are some stories of how Save the Children has changed people’s lives in eastern Ukraine.

When the conflict started, Olena* and her family had to leave Donetsk city and moved to Kurakhove, where they currently rent an apartment. A Save the Children Micro-grant allowed Olena to buy specialized photography equipment and was able to start her own business. 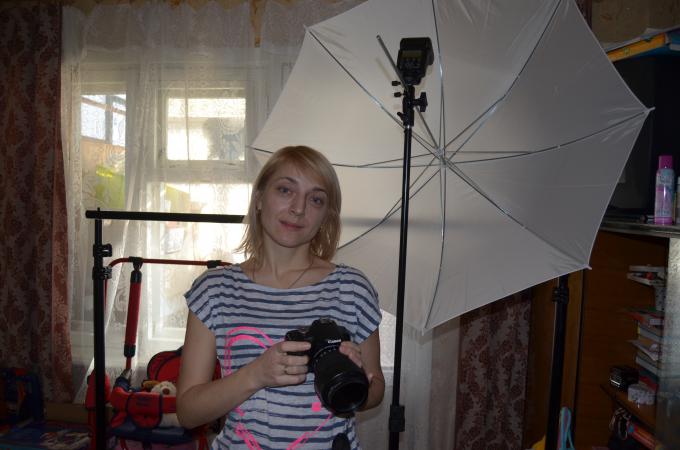 Olena used her Micro-grant funding to buy a camera lens and flash, different backgrounds, as well as a studio stand. (Photo: Slavic Heart) 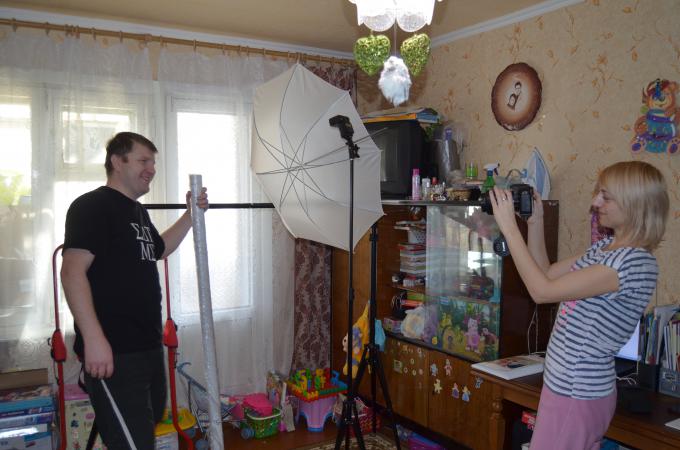 Together with her husband, Olena offers photo sessions and plans to open a local photography studio. (Photo: Slavic Heart) 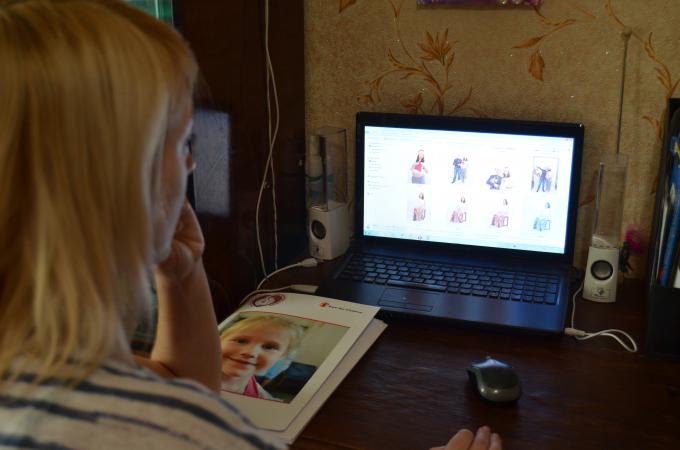 Olena initiated a cooperation with a local kindergarten, a school, and a music conservatory to organize photography shootings of children during different events. (Photo: Slavic Heart)

Oleksiy* is an entrepreneur who works as a landscaper, mowing the grass, taking care of gardens, and cutting trees. When the fighting started, the number of customers dropped dramatically and Oleksiy was unable to maintain his equipment, making it even harder to make ends meet. He had barely enough money to feed his family, and was unable to buy medicines for his sick parents.

With support from the Micro-grants programme, Oleksiy was able to purchase a new chainsaw, allowing him to return to work and earn money again. He is back to work, cutting trees that pose safety hazards to local properties or could injure people on the streets. This service is in high demand in Donetsk and Makiivka, so he is not only earning income again, he is making an important contribution to the community’s well-being. 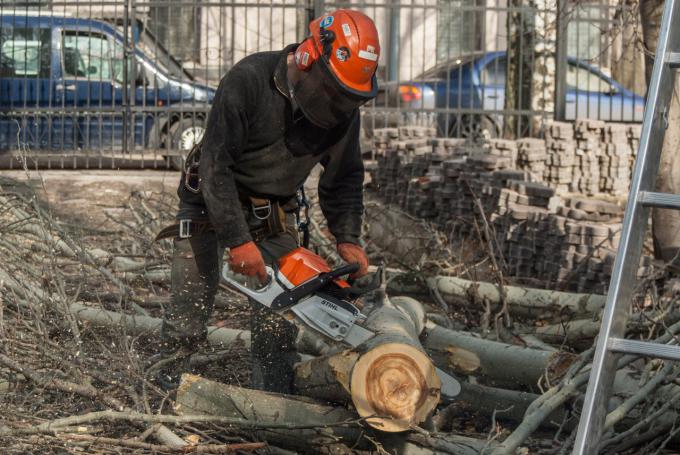 “This grant has brought income for me and help to the city”, says Oleksiy who now plans to further develop his business by hiring additional employees and widening the geographical area of his services. (Photo: Donbass Development Center)

A mother of three, 36-year-old Mariia* fled from Donetsk to Selidove when the hostilities started and her home was no longer safe. She now lives with her 87-year-old grandmother and young children in a small apartment. Unable to find work, the family was only able to survive with the help of humanitarian aid.

Mariia is a qualified seamstress; before the conflict she tailored clothes and made alterations. However, artillery shelling destroyed the garage where all her equipment was stored and she was unable to bring anything with her to Selidove. Save the Children’s programme helped Mariia to return to her profession – with Microgrant funding money she bought an ironing board and an industrial steamer. Currently she is working with a local second-hand shop to repair clothes for resale. Due to the constant demand for this kind of service, Mariia plans to expand her business in the near future. 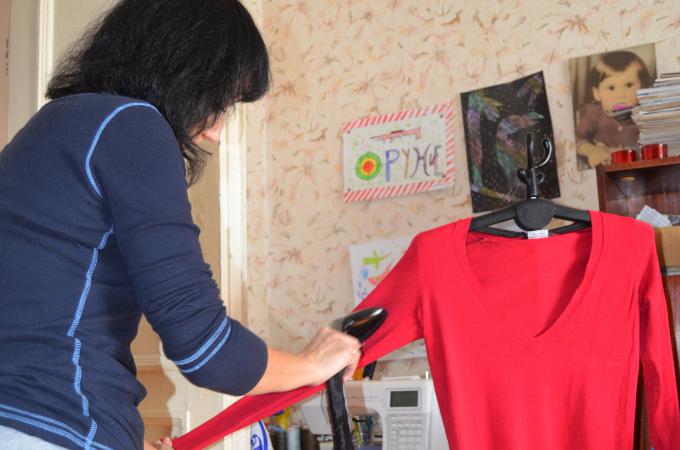 Mariia* provides tailoring and clothing repair – services that are in high demand in her new community. (Photo: Slavic Heart)

While some people have left the conflict zone, many others continue to live in areas which are still affected by violence. Oleksandr* and his family live in the Petrovskiy district of Donetsk, which is one of the hotspots in the area. When the conflict began, their car was burned and their house was damaged. The family had to rely on humanitarian aid as the family business (selling of construction materials and installing of windows and doors) had to be suspended.

Oleksandr admits that over the last two years they were in constant need of money and the quality of their nutrition worsened. The adults even had to skip some meals in order to feed their children.

Save the Children’s micro-grant gave the family an opportunity to start a new business – breeding of poultry, such as geese, hens and turkeys. With Save the Children’s support Oleksandr* has constructed an incubator and special pens for the adult birds. Oleksandr is very grateful for the support he received, and proud that he can once again provide good nutrition for his family. As his wife says, having this kind of business means they will never go hungry again – some of the poultry can be sold and some kept for feeding the family. 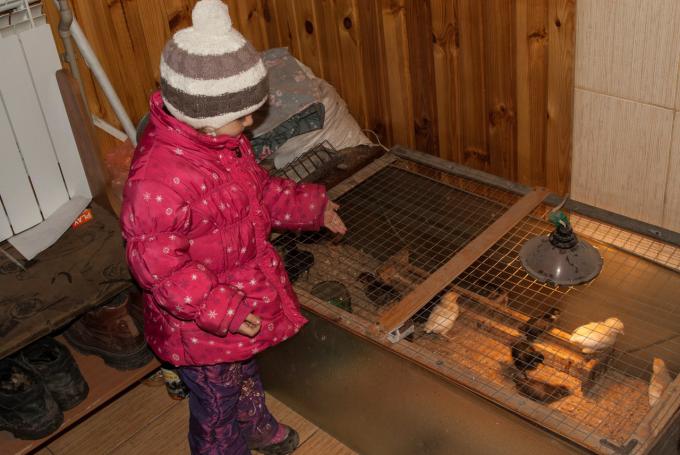 The family plans to set prices lower than on the market to target those who don’t have a lot of money. (Photo: Donbass Development Center) 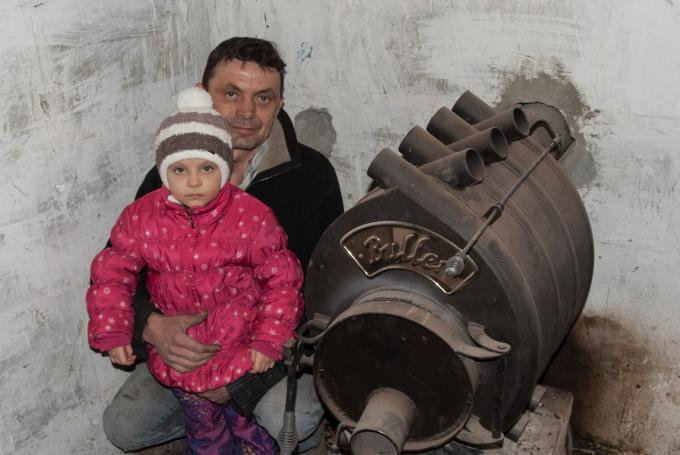 “When you lose everything at once, any help and support is very important. It’s difficult to start everything from the beginning, but we will get through”, says Oleksandr. (Photo: Donbass Development Center)

*Names are changed to protect identity.

162 MILLION USD NEEDED IN 2019 TO MEET THE HUMANITARIAN NEEDS OF 3,5 MILLION MOST VULNERABLE PEOPLE INCLUDING 700,000 CHILDREN

"YOU SAVED US FROM FREEZING WEATHER"