SAVE THE CHILDREN WARNS OF FORGOTTEN CRISIS IN UKRAINE, AS CONFLICT ENTERS FIFTH YEAR

(Brussels, 28 February 2018): More than half a million Ukrainian children are being forgotten by the world, Save the Children is warning ahead of a conference to try and raise attention to the crisis, being held in Brussels by the European Commission and the United Nations.

The conflict, on Europe’s doorstep, has destroyed or damaged an average of two schools every week for the past four years, and disrupted the education of more than 600,000 children. More than 84 percent of schools in some areas are now in need of repairs and reconstruction, according to latest assessments.

Areas where children used to play and learn are now littered with landmines and unexploded ordnances, killing and injuring dozens of children a year who are risking their lives to go to school. Eastern Ukraine is now one of the most mine-contaminated places on the planet.

More than 100,000 children living along the ‘contact line’ – a 500-kilometre strip of land dividing government and non-government controlled areas where fighting is most fierce – are especially vulnerable. Thousands of these children have to shelter in bunkers to escape regular shelling, and more than a quarter of the children suffer psychological impacts such as frequent nightmares and panic attacks, according to UNICEF.

Children are increasingly going short of food, and the number of people without enough food has doubled in the past year in some areas. Families say they are forced to borrow money or cut back on healthcare expenditure in order to afford basic meals.

Michele Cecere, Save the Children’s International Representative to Ukraine, said: “There are still hundreds of thousands of children living in dire conditions in areas directly affected by shelling and densely mined. Children should be able to go to school without fearing their classroom may be shelled. Save the Children calls on the international community to step up efforts to ensure boys and girls in eastern Ukraine benefit from quality and safe education, psychosocial support, dignified living conditions and access to quality healthcare”.

Humanitarian agencies have launched an appeal for US$187 million to meet the needs of 2.3 million people across Ukraine in 2018. Last year, only 35% of the $204m appeal for Ukraine was funded. Save the Children is calling for education and protection to be prioritized, and is supporting efforts to end attacks on schools and the military use of schools in the conflict, and calls on the Government to finalise its endorsement as part of the Safe Schools Declaration process.

Indiscriminate shelling has damaged or destroyed 740 schools since the beginning of the conflict four years ago.

The “Eastern Ukraine: A forgotten crisis after 4 years of conflict” conference in Brussels brought together UN agencies, the European Commission and Parliament, the Government of Ukraine, EU member States, the ICRC, local and international non-governmental organizations, for a constructive dialogue leading to a shared understanding of the humanitarian needs and best ways forward. 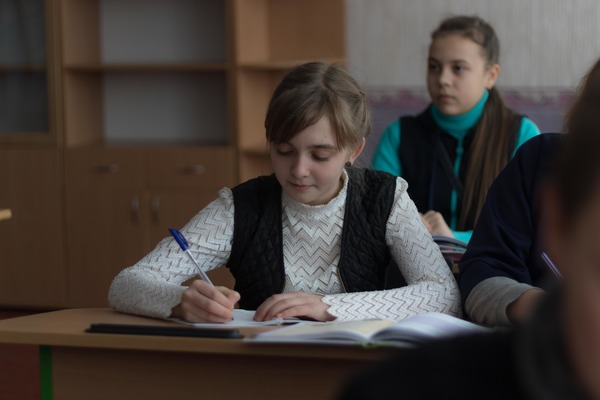 Education process at school in Eastern Ukraine. Cedits: Olha Sydorova / Save the Children